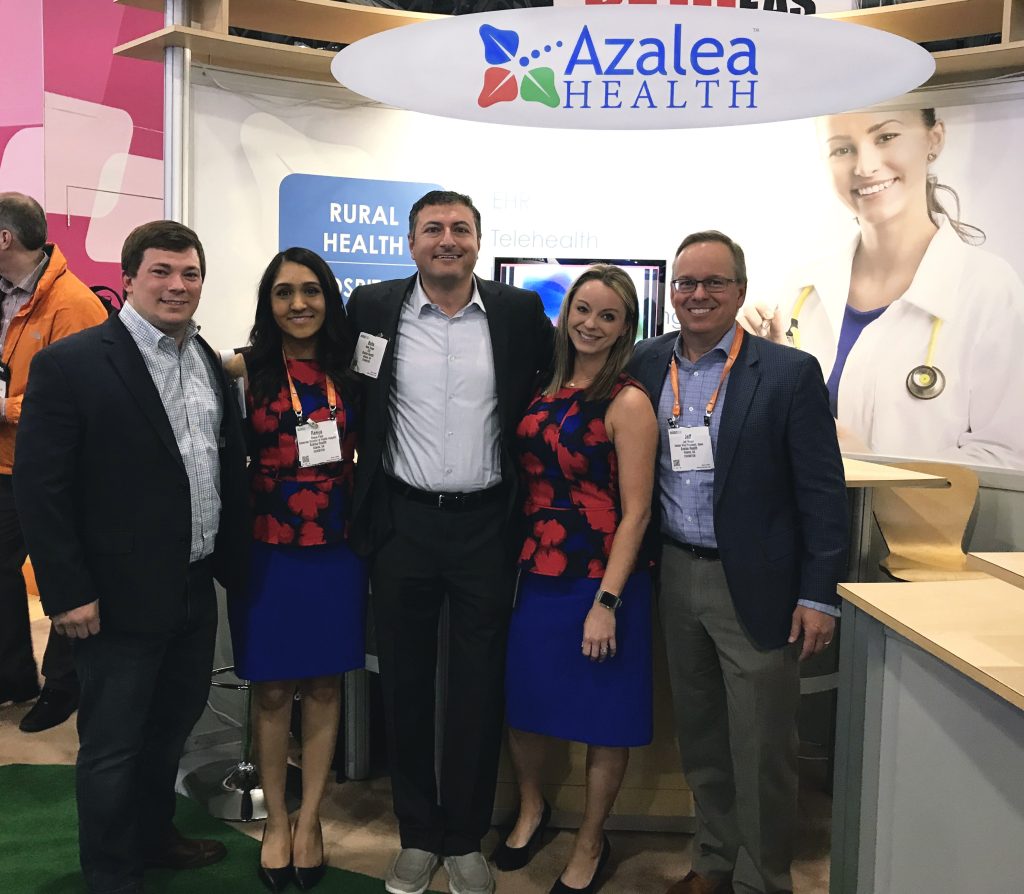 There are bigger trade shows than HIMSS, but not in the health IT arena. With 43,000 people in attendance in Las Vegas this year, it is always good to run into old friends, and very easy to make new ones. After all, we’re all there for the same reason – improving healthcare.

Azalea Health was once again part of the Georgia pavilion, the only state with its own booth at HIMSS. With the back-page ad on the program book, our home state had great visibility which reflected well on the varied and interesting companies located in the Georgia booth. We are looking forward to participating in the booth next year.

A thrill for us Georgians was seeing Dr. Denise Hines, who spoke at Azalea Health’s 2017 user conference, take the stage. Dr. Hines is the Chair of HIMSS North America through June 2018 and did an outstanding job with her interviews with Don Rucker, M.D., National Coordinator for health information technology, and Magic Johnson, the closing keynote. Dr. Hines is the executive director of the Georgia Health Information Network and CEO of eHealth Services Group.

Hundreds of Topics and Talks

Topics at HIMSS18 were almost as diverse as attendees, with a focus on cybersecurity, telehealth, interoperability, healthcare consumerism and care coordination. In addition to the “official” sessions there were demos, meetings and presentations taking place throughout the exhibit hall. It would have been difficult NOT to learn something while there!

It begins with moving healthcare data to the cloud; if you’re an Azalea Health customer, your data is already there! And while analytics and artificial intelligence will likely play a greater role in diagnostics and treatment decisions, those decisions will ultimately be made by physicians, not machines, he stated. If you’d like to hear his predictions and thoughts, you can find the full talk on YouTube.

CMS Administrator Seema Verma announced a new initiative focused on improving patient access to their health data. The MyHealthEData initiative is designed to give patients more control over their medical information by improving access and sharing. The initiative will be led by the White House Office of American Innovation with participation from HHS, CMS, and the ONC, according to a press release.  The National Institutes of Health and the Department of Veterans Affairs will also be involved in the project.

White House Senior Advisor Jared Kushner also made an appearance, announcing that the Trump Administration has a plan for making access to health records and interoperability a priority. Kushner said that the Office of American Innovation has spent the last six months listening to a variety of stakeholders, including doctors, clinicians, patient advocates and technology experts.

And while broad, sweeping initiatives are one feature of HIMSS, the sessions that showcase unique challenges and innovative solutions are fascinating. For example, one of the most interesting uses of telehealth is, quite literally, out of this world. Speakers from NASA described how telehealth is used to monitor the health of astronauts aboard the International Space Station.

If you’ve never been to a HIMSS conference, it might be time to plan a trip to Orlando for next year. And if you do attend, we hope to see you there!