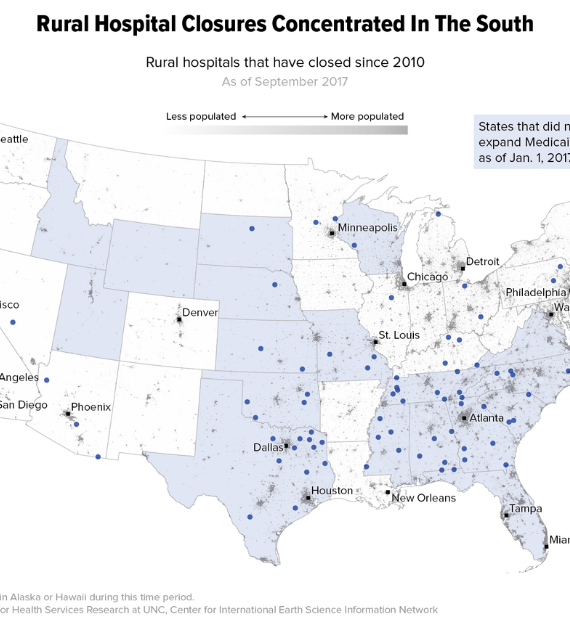 Source: HUFFPOST If you want to watch a rural community die, kill its hospital.
After the Lower Oconee Community Hospital shut down in June 2014, other mainstays of the community followed. The bank and the pharmacy in the small town of Glenwood shuttered. Then the only grocery store in all of Wheeler County closed in the middle of August this year.
On Glenwood’s main street, building after building is now for sale, closing, falling apart or infested with weeds growing through the foundation’s cracks.
Opportunity has been dying in Wheeler County for the last 20 years. Agriculture was once the primary employer, but the Wheeler Correctional Facility, a privately run prison, is now the biggest source of jobs. With 39 percent of the central Georgia county’s population living in poverty, there aren’t enough patients with good insurance to keep a hospital from losing money.
The hospital’s closure eliminated the county’s biggest health care provider and dispatched yet another major employer. Glenwood’s mayor of 34 years, G.M. Joiner, doubts that the town will ever recover.

“It’s been devastating,” the 72-year-old mayor said, leaning on one of the counters in Glenwood’s one-room city hall. “I tell folks that move here, ‘This is a beautiful place to live, but you better have brought money, because you can’t make any here.’”

Rural hospitals are in danger across the country, their closures both a symptom of economic trouble in small-town America and a catalyst for further decline.

Since 2010, 82 rural hospitals have closed nationwide. As many as 700 more are at risk of closing within the next 10 years, according to Alan Morgan, the CEO of the National Rural Health Association, a nonprofit professional organization that lobbies on rural health issues. 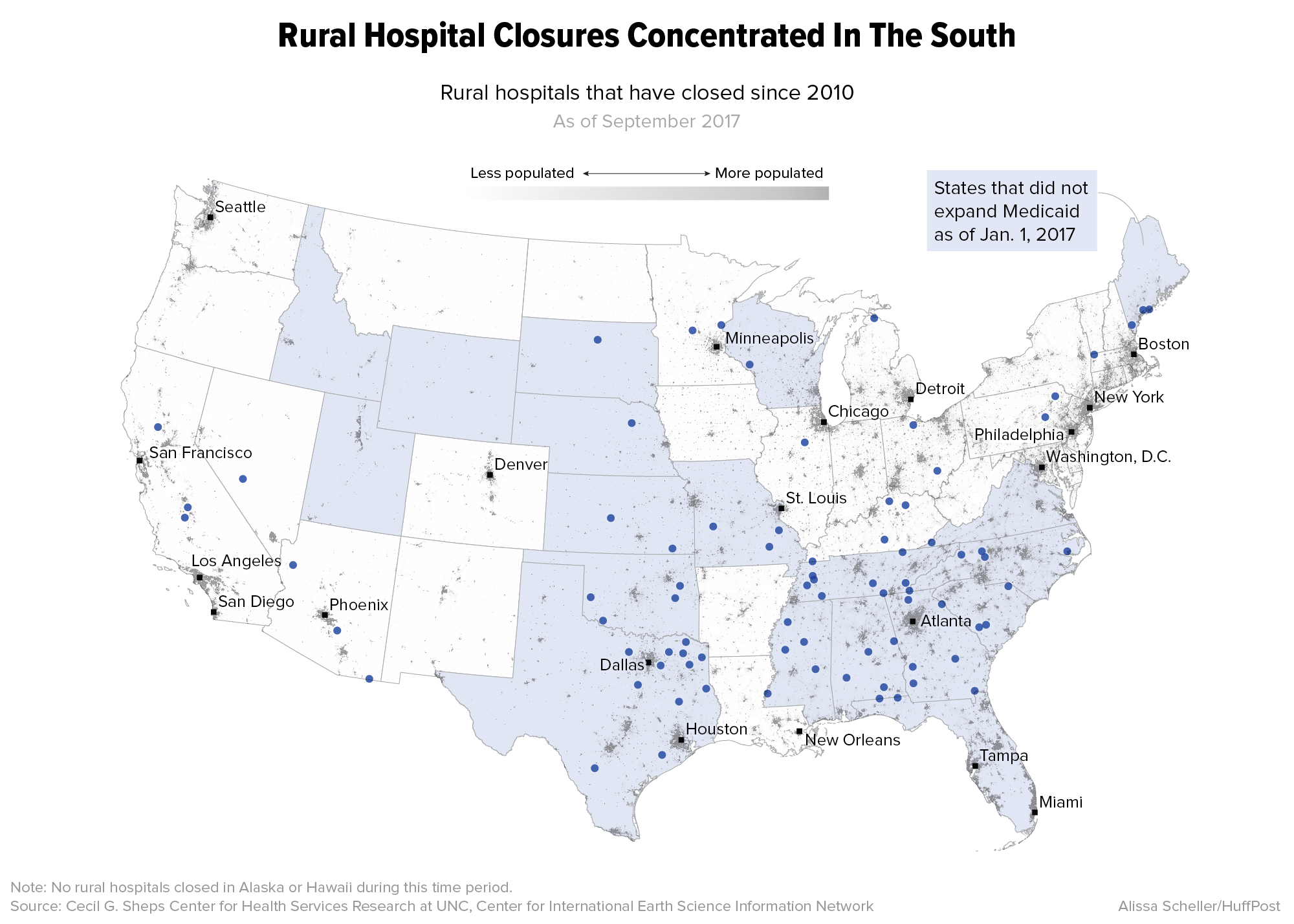 One in five adults in the South report having poor health. Fifteen percent of non-elderly residents are uninsured, according to the Kaiser Family Foundation, and that’s 5 percent higher than the rest of the country. The South also has the largest cluster of states that have not expanded Medicaid under the Affordable Care Act: Alabama, Florida, Georgia, Mississippi, North Carolina, Oklahoma, South Carolina, Tennessee, Texas and Virginia.
“Those most in need of health services have the fewest options available, and we are closing rural hospitals,” Morgan said. “From a policy standpoint, we are going in the wrong direction.”
Georgia is “ground zero” for rural hospital closures, he said.
Six rural hospitals in the state have closed their doors since the beginning of 2013. Two of those have been reopened as modified medical facilities, but no longer function as full-fledged hospitals. And more than half of the state’s remaining rural hospitals are vulnerable to closure, according to a 2016 report on rural hospital strength by iVantage Health Analytics for the National Rural Health Association. 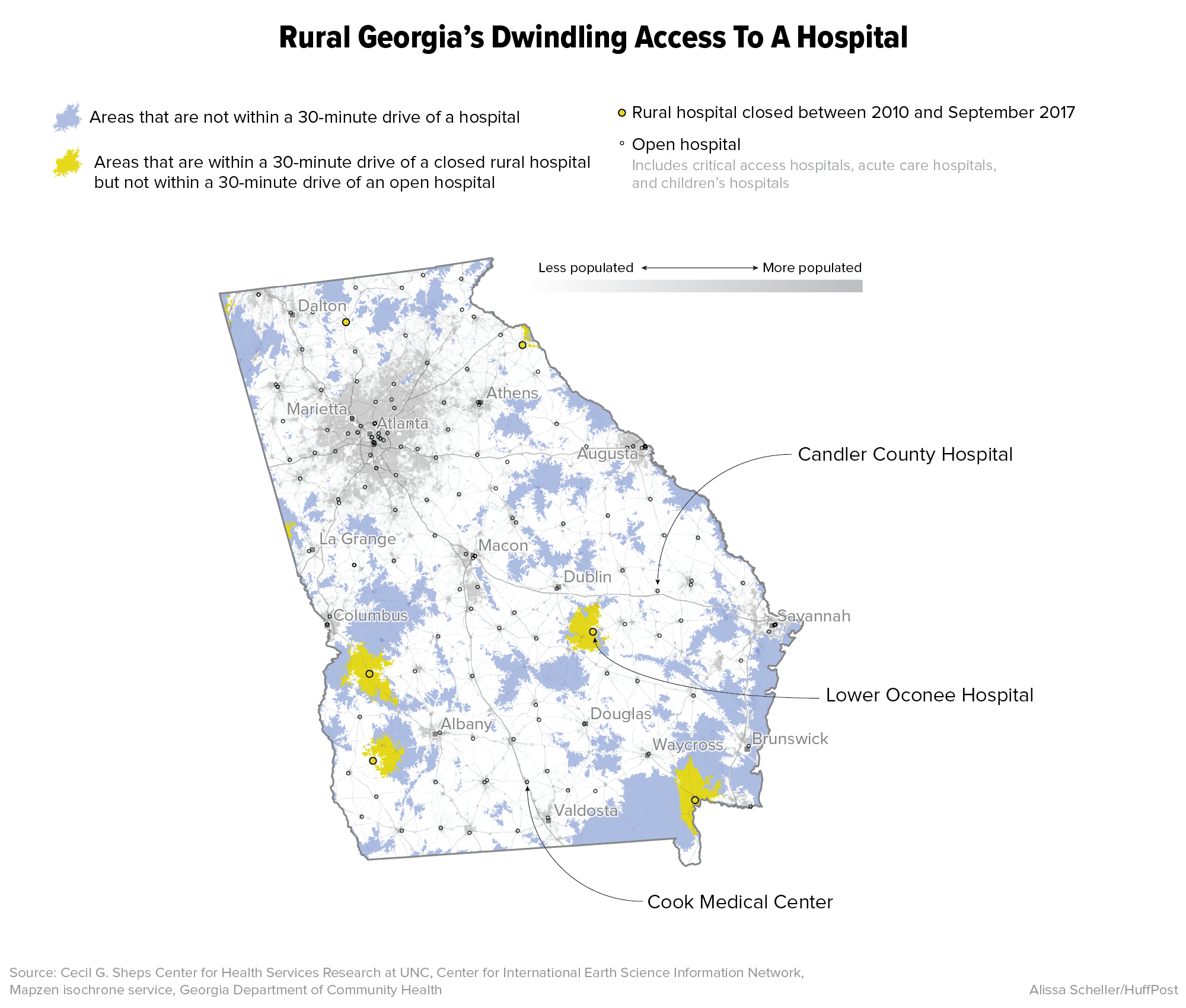 The troubles with Glenwood’s hospital became apparent about a decade ago.
First there were management problems at Lower Oconee Community Hospital as the facility grappled with cash flow difficulties, stemming in part from the county’s uninsured rate of 20 percent. Then the hospital was sold. Then there were more management problems and some failed last-ditch attempts to keep the hospital open, according to Mayor Joiner. It finally closed its doors for good in June 2014. That brought the total number of hospitals in Wheeler County, where some 8,000 people live, to zero.
About 120 jobs at the hospital itself ― including positions for doctors, nurses, administrators, orderlies and the cleaning crew ― vanished, along with most of the foot traffic on Glenwood’s main street. Attracting other businesses got that much harder. Most importantly, gone was potentially life-saving care.
For three years now, the building has sat vacant, a deteriorating reminder of the community’s loss.
The drive to the nearest hospitals in neighboring counties averages between 30 and 45 minutes, depending on where the patient is coming from in Wheeler County. The county’s two ambulances don’t carry blood. And any delay in getting to an emergency room can be deadly for someone who has suffered a heart attack, a stroke or massive trauma.
Wheeler County’s director of emergency medical services, Selena Howell, estimates that keeping Lower Oconee Community Hospital open would have made the difference in saving four or five lives over the last three years.
“Now that may not seem like a lot, but it sure meant something to those folks’ families,” she said.
Howell wearily explained that she herself has been struggling with a kidney infection on and off for the past year, but there are long waits to see a doctor because of the decreasing numbers of physicians and hospitals in the region. The soonest she could get an appointment was months away.

Candler County is struggling to make sure its hospital, which is about 45 miles east of Wheeler County, doesn’t go the same way as Glenwood’s. Among rural hospitals, the Georgia Department of Community Health ranks Candler County’s facility as the second-most financially in need. The state’s new rural hospital tax credit program encourages businesses and individuals to donate to these facilities through a 90 percent tax write-off.
“You don’t know what’s going to happen in the next five months,” Candler County Commission Chairman Glyn Thrift said last month. “Today’s a good day. We have enough money to make payroll today.”
A series of bad decisions ― especially the installation of a faulty IT system ― combined with the usual factors squeezing rural hospitals have left the Candler County Hospital with about $6 million in accounts payable and an additional $4 million debt that the county incurred on its behalf, according to hospital CEO Dave Flanders. The facility, located in the town of Metter, owes another $1.8 million in additional notes and liabilities. The hospital has been unable to make debt payments to the county, forcing the local government to increase property taxes and borrow money in January and February to cover its own bills.
But Flanders and Larry Hadden, who sells insurance in Metter and serves as chairman of the Candler County Hospital Authority, both think the hospital is going to make it.
“Will it be easy? Absolutely not. We’ll probably rely on support from the county,” Hadden said.
Candler County, population 11,000, has dug deep to keep its second-largest employer afloat.
“We’re all in this together. It’s one thing to look at the financial numbers,” Hadden said. “It’s another thing to look at saving someone’s life.”
The loss of a rural hospital goes beyond even vital medical care. It represents a loss of identity, a loss of community.
“There’s a psychological impact where people are tied to their hospital and feel comfort with it here,’’ said Doug Eaves, the Candler County administrator. “They’re emotionally committed to it. It’s something they’ve always had.”
“I understand things are changing, but try to have a thriving community without a hospital,” said Carvy Snell, publisher of the Metter Advertiser, a 104-year-old local paper.
Metter’s main street is already showing economic cracks. While it looks bustling compared to Glenwood’s, some shops are closed or empty.
The county got a financial boost when Linzer Products Corporation opened up a paint manufacturing and distribution center in Metter last year, creating 200 jobs. It would be a lot harder to attract that kind of new business without a hospital, Snell said.
Flanders pointed toward cost-cutting measures implemented by the management company ER Hospitals ― including better negotiation on insurance payments and streamlining of administrative services across the company’s health care operations ― as critical to the Candler facility’s survival. The hospital’s robust volume of 130 to 135 surgeries a month and its profitable “swing beds” ― which can be used for patients requiring either acute care or skilled nursing care ― are helping it break even on operating revenue, according to Flanders.
But he has no answer for the long-term debt, and if the hospital were to close, Candler County would still be on the hook for the money.
“We’ve got to go down swinging,” said Thrift, the county commission chairman. 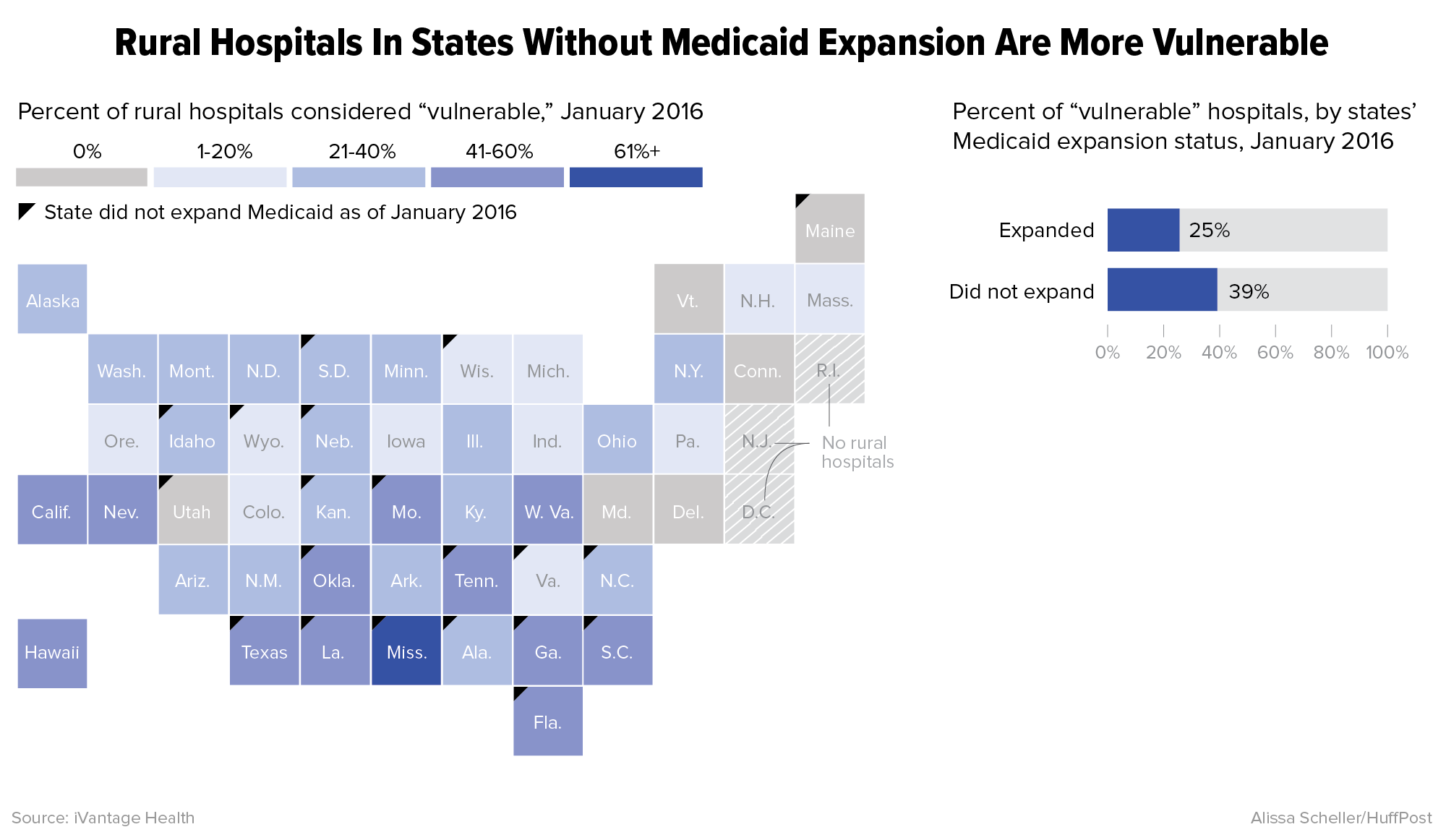